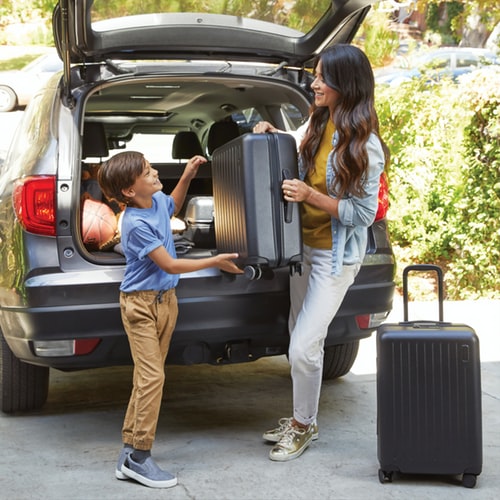 5 Tips to Make Traveling with Kids More Fun for Everyone

You’re dedicated to sharing your love of travel with your children, but with every delayed flight and unplanned pitstop, you find yourself questioning that conviction. Because while traveling with kids can be incredibly rewarding, it can also be incredibly stressful. It’s not easy to plan a vacation the whole family will enjoy, let alone keep the peace when everyone’s jet-lagged and stressed out.

That doesn’t mean it’s not worth it, however. There’s nothing quite like seeing your kids experience a new culture for the first time or watching them excitedly recount their adventures to friends. Instead of scrapping the whole family vacation idea the next time you’re stressed out and far from home, use these tips to make family travel easier on everyone.

If kids feel like they’re just tagging along on Mom and Dad’s holiday, they’re less likely to be excited for the trip. Engage your kids in the planning process in age-appropriate ways. Preschoolers and elementary schoolers may help pack and pick out toys to take, while middle and high school-aged kids can research the destination and maybe even choose an activity or two of their own.

Focusing on the road keeps your mind busy while driving, but for kids in the back seat, long miles on the road can feel endless. Cut down on complaints of boredom by setting up in-car wifi. With an in-car hotspot, your kids can stay busy watching videos and playing games on their tablets. Just remember to set everyone up with headphones so you can keep listening to your own music and podcasts in the front seat.

Pay extra for an easier flight

Flying instead? Spare yourself a stressful travel experience by booking an early morning flight and paying extra to fly direct. Early flights are less likely to be crowded or face delays than flights later in the day, and any parent who has missed a connecting flight with a gaggle of kids in tow can tell you why direct flights are worth it. Other tips for a low-stress flight include wearing clothes that come on and off easily — so no buttons, zippers, or laces — and packing plenty of snacks and water to keep kids content during the flight.

It’s tempting to take everything but the kitchen sink when traveling with kids, but hauling all that luggage is likely to be more trouble than it’s worth. Pack the necessities like car seats and travel strollers, but avoid filling luggage with clothing and bulky entertainment items. You can always do laundry and buy small items while traveling to avoid overloading your luggage.

Don’t stay in a hotel room where you’ll have to be quiet as a mouse after the kids go to bed and supervise your children wherever they go. Holiday home rentals are far more family-friendly than hotels, with separate bedrooms, multiple bathrooms, and the ability to cook your own meals. Instead of living out of suitcases for a week, you can feel like you’re at home — only better.

The worst thing you can do when traveling with kids? Expecting it to be just like the vacations you took before becoming parents. While traveling as a family is special in its own right, it’s not the same as traveling kid-free. Instead of trying to pack everything into one trip and getting frustrated when your itinerary doesn’t go as planned, go into family travel with a relaxed schedule and an open mind. While you might not hit every attraction or avoid every backseat squabble, the memories you create together make the little stresses more than worth it.

Portugal holiday info and destination guide
Portugal is situated in south-western Europe, bordered by the Atlantic Ocean to the west and south and sharing the Iberian peninsula with Spain to the north and east. The Azores and Madeira in the Atlantic Ocean are also a part of Portugal. The climate is Mediterranean and it is one of the warmest European countries. In mainland Portugal, yearly temperature averages are about 15°C (55°F) in the north and 18°C (64°F) in the south.
Portugal has lately seen a  an increase in popularity as a tourist destination and also a significant increase in prosperity.
It has everything to offer the visitor, a rich, unique culture, lively cities and beautiful countryside with outstanding landscape diversity. It is possible to travel from green mountains in the North, covered with vines and all varieties of trees to rocky mountains, with spectacular slopes and falls in the Central Portugal, to a near-desert landscape in the Alentejo region and finally to the glamorous beach holidaysdestination of the Algarve – and all this in a single day. For those who like to combine their holiday with leisure and sport, Portugal is a golfing haven with an excellent golfing infrastructure. Fourteen of Portugal’s courses are rated in the top 100 best in Europe.

Lisbon
Lisbon is the capital of Portugal, its contemporary culture is alive and thriving, making it one of the most ‘happening’ places in Europe today.
Stretching along the northern bank of the river Tejo and perched on the edge of the Atlantic Ocean, Lisbon is a city that uses water as a defining element where as the land rises away from the water, steep streets and stairways form the old tangled neighbourhoods or give way to squares and green parks. It is an enchanting city with its white bleached limestone buildings, intimate alleyways and an easy going charm mixed with a nostalgia reflected in the traditional music of the fado performed in cafes and small night clubs in the old quarter of the city, the Alfama district. Still bearing signs of  a long ago Moorish presence in the city, the buildings are very close to each other with irregular streets, winding alleys and the azulejo-covered crumbling walls of ancient buildings. It is a great place in which to wanderaround.
For people watching the Rossio, the main square in Lisbon, and the equivalent of London’s Trafalgar Square is the meeting place for locals and a great way to experience the lively city life of Lisbon.
Other ‘must-sees’ in any visit to Lisbon are the Belem Tower, the Jerónimos Monastery, the Monument to the Discoveries and the  Cristo Rei, which is similar to the Christ statue in Rio de Janeiro, standing over 100 meters tall on the opposite bank of the Tejo from downtown Lisbon.

Estoril
Further afield but within an easy day trip from Lisbon is Estoril.  Here you will  find a coastline with fabulous beaches interspersed with impressive cliffs overlooking the Atlantic. It used to be the playground of European royalty and this glamorous past is reflected in its many gardens, villas and palaces. Estoril is renowned nowadays for its fresh fish and seafood restaurants, the Estoril Spa, renowned for its regenerative therapies, the Casino Estoril, the largest in Europe, and its golf courses where it is considered one of the top destinations.

Porto
Porto is the second largest city, the capital of the historic region of northern Portugal. Porto is above all renowned for the production of port wine but it is also a busy industrial and commercial centre. It has a semi-Mediterranean climate, but it can be cooler than other cities with this climate because it is strongly affected by the Atlantic Ocean. The city is built along hills that overlook the Douro river estuary. It has a historical centre whose buildings are granite and monumental unlike other major Portuguese cities which tend towards the baroque. It has UNESCO World Heritage status.

Coimbra
Coimbra is a small university city full of interesting places. The medieval centre of Coimbra is wonderful for just wandering around in and getting lost there is a pleasure.  It is unusual in still having a number of independent bookshops, boutiques, toyshops, galleries, antique shops, restaurants and interesting museums.

Evora
Evora is the largest city in the central Alentejo region. It has a magnificent cathedral and cloisters and its historic centre also has UNESCO World Heritage listing.

Algarve
The Algarve is the southernmost region of Portugal, on the coast of the Atlantic Ocean. It has stunning coastlines, wonderful beaches and excellent golf courses. The water along its coastline tends to be warmer and calmer than the water along the west coast. In winter, it is a beautiful, peaceful corner of southern Europe with plenty of sun bleaching its white-washed towns with their Iberian and Moorish-influenced architecture. Faro is the regional capital and is a popular destination. There is an impressive beach party and night life but many visitors might prefer to use Faro as a base to explore the more
remote areas of the Algarve in the off-season. Albufeira, once a small fishing village, has now developed into being a very touristic area but it does have  lovely beaches, a very good climate, and many restaurants, bars and pubs. Algarve holiday homes and villas can be found near some of the most popular beaches and may offer access to some of the finest golf courses in the region.

Madeira
Madeira is 310 miles from the African coast and 620 miles from the European continent. It is known worldwide as the island of eternal spring, or the Garden Island. It has a mild if rather wet climate throughout the year.
Funchal, the island’s capital is home to resorts, gorgeous panoramas and lots of local colour. ‘Must-sees’ with any visit to Madeira are the levadas, an impressive system of aqueducts started in the 15th century to bring water from the mountains to farmlands, Cabo Girão, one of the world’s highest ocean cliffs, the magnificent gardens of the Jardim do Monte Palace and the Jardim Orquídea orchid gardens, for which Madeira is justly renowned.

A holiday home or villa in Madeira would be the perfect base for a holiday on the Portuguese island of Madeira.

For info on accommodation in Portugal visit: Portugal Holiday Homes and Villas to let